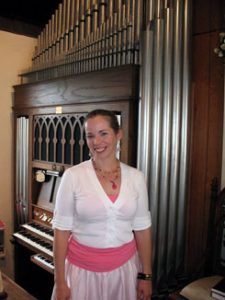 M. Quinn Anderson has served as the organist and choir director at Saint John Lutheran Church in Bellmore since 2002.  She was awarded a Bachelor of Science degree in music from Adelphi University in 2003, with a major in piano and flute.  Quinn studied composition with Paul Moravec, who won the 2004 Pulitzer Prize for music, piano with Marilyn Lehman and flute with Linda Wetherill.  In 2006, she graduated from the Aaron Copland School of Music at Queens College with a Master of Science Degree in Music Education.  During that time, Quinn studied organ with Maxine Thevenot.  Quinn has also obtained her Law Degree.

Currently, Quinn directs the senior choir, children’s choir, children’s bell choir and the youth choir in addition to playing the organ on Sunday mornings and for special services including funerals and weddings.